Cliven Bundy's ancestors have been working this land from the 1870's. In that time they have built roads and dug irrigation canals for their cattle. Then in 1993 the Federal Government began charging 'grazing fines' and 'trespassing fees' when they said his cows crossed onto Government land. The FEDS own over 84% of Nevada and 24% of the Nation. It is rumored this incredible land grab is actually collateral on the spiraling National Debt. Ostensibly, this public land has been restricted in an effort to protect an endangered species of desert tortoise; however, a conservatory for these land turtles recent closed due to lack of funds and, when it did, officials euthanized half of the tortoises they deemed too weak to return to the wild. Clive Bundy's fines soon skyrocket to over a million dollars with penalties added. The Bureau of Land Management, or BLM, has driven 52 of the 53 ranchers off their land through similar arbitrary and unconstitutional practices; such as, limiting the number of cattle allowed to graze on the public land to a number unsustainable for business. Bundy continued paying money to Clark County and the State of Nevada, not recognizing the audacious authority of the BLM. After 2 court battles were lost a judge ordered Bundy's cattle to be seized in 2013. That brings us to now. On Wednesday 200 Federal Agents arrived on Bundy's property, began stealing the family's cattle, and attempted to destroy his infrastructure. The BLM even went so far as to set up a pen called the 'Free Speech Area', which patriots promptly trashed and put out their own signs that read 'Free Speech is not an area.' The family protested and were met with unwarranted violence. The video of the confrontation went viral Thursday and soon other ranchers who are being squeezed off their land answered the call from all around the surrounding Western States. FOOTNOTE: Nevada Senator Harry Reid's son Rory Reid brokered a deal with ENN, a Chinese energy consortium, to build a 5 billion dollar solar farm on the site. Also, Harry Reid's former Chief of Staff is the current head of the BLM.

Part 3: We want our cattle!
After Clark County Sheriff Gillespie announces that BLM is to cease its operation, Bundy makes his own announcement at the makeshift flag draped podium in the middle of the badlands. His ultimatum; the Sheriff has one hour to disarm the BLM and tear down road blocks and checkpoints. When that doesn't happen he tells the thousand people gathered at Bunkerville he knows where the FEDS are keeping his family's cattle, let's get them.

US CONSTITUTION
Article 1, Section 8, Clause 17:
"To exercise exclusive legislative jurisdiction in all cases whatsoever, over such district (not exceeding ten miles square) as may, by cession of particular states, and the  acceptance of Congress, become the seat of the government of the United States, and to exercise like authority over all places purchased by the consent of the legislature of the state in which the same shall be, for the erection of forts, magazines, arsenals, dockyards and other needful buildings;


And finally, if you're still interested in the truth, here's Clive Bundy speaking at the Town Hall Meeting... 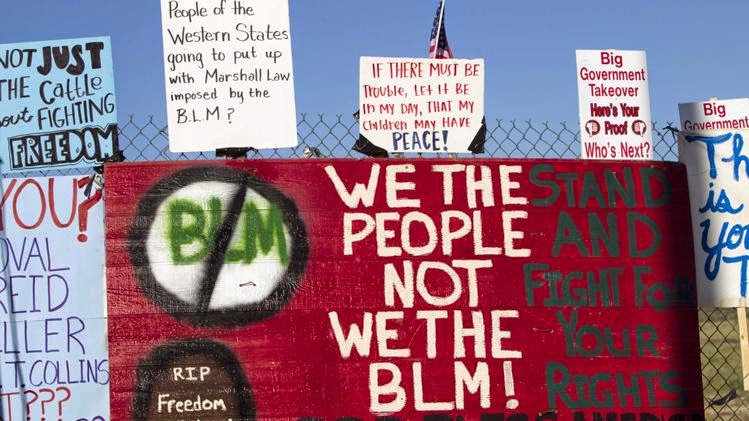