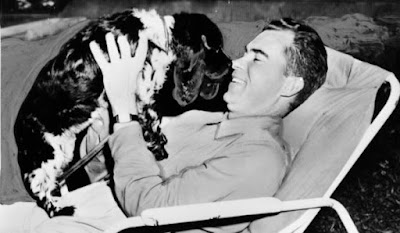 Nixon sits in an armchair and stares out on the audience as if they're a roaring fire. He is listening to his OLD TAPE RECORDINGS, which play faintly in the background. The reel runs out. His gaze shifts to Checkers (dude in dog costume) who lays on the floor next to his chair. Checkers lifts his head and the two make eye contact. Nixon breaks eye contact first and returns to his far off wistful look.

NIXON: You know, I have moments of clarity, moments of lucidity... where I see what I've done... ah heck, what do you know Checkers, you're just a dog...

Nixon gets up and retrieves Scotch bottle from corner.

NIXON: You know, you know sometimes I feel like a dog, yeah, a dog that's been beaten for so long that... well...

He pours drink and circles his spot as though looking for something.

NIXON:  A dog that's been beaten for so long that he gets to know himself through the beatings.

NIXON: My father tried to drown me... The Anaheim Ditch, by Yorba Linda standards, it was a historic ditch… brought in fresh water for the citrus crop, sugar-loaf soil, nothing would grow… my father figured he wouldn’t buy fertilizer until he brought in enough lemons to pay for it. He went bust. Idiot. Anyways, we weren't allowed to swim in it, or wade in it, the other kids, they were allowed, their parents let them, not us, not Frank, not my father. Prick. One day he saw us, me and my brothers, caught us playing in it. That miser grabbed me by the scruff of my neck, hauled me out, pushed me back in, taunted me, then threw me and my brothers in a couple more times just to drive the point home. The neighbor kids all laughed. Real hoot it was. Cock-suckers. He tried to drown me, tried to drown all of us… I’ve never told anyone that story. At least no one ever tried to drown you... it was one time and that was a Goddamn accident! I apologized, for crying out...

Checkers gets up and sits at Nixon's feet.

NIXON: Sometimes I wish you could talk, Checkers. And sometimes, I wish I could just be quiet. It’s like with the Great Silent Majority, once they get started, they never shut the fuck up!

Checkers wanders about SNIFFING. Nixon sets up another reel, hits a few buttons, slugs his drink, and pours another.

Nixon slurps down his drink and pours another. Nixon doesn’t notice Checkers taking a shit behind him. Checkers returns to Nixon and paws at his knee.

Checkers goes back to SNIFFING. Nixon shakes it off, sips drink.

NIXON: Maybe I don’t need to hear it… maybe nobody needs to hear it… be nice though, be nice to hear it… You know, maybe the Hippies are right, with all that free love shit, then, again, it’s got to mean something, it has to be earned, it can’t just be free… it can’t be that easy… it’s like I’ve always said, you can fool some of the people all the time, and all of the people some of the time… but ya can’t… well ah… you know…

NIXON: And the rest you carpet bomb into the fucking stone age… ha… you know that’s not, I shouldn’t have said… Look at me, I’m talking to a…

Nixon lets out a SIGH, gets up, stokes imaginary fire. He paces the length of the stage, gaining momentum.

NIXON: They’re gonna try and crucify for this. This, this, this thing, this Watergate thing… and you know, I’ve been set up. It’s a set up. Sure, I authorized the fund, they’re calling it a slush fund, but I never gave the go ahead to break into the Goddamn hotel. My tapes will prove that. My tapes will exonerate me. They’ll show… That’s why I, why I’ve… It’s this whole Bay of Pigs thing. But I tell ya what, I’m not going down without a fight. I’m a fighter Checkers. In ’62 they thought I was done. Hell, I thought I was done! When I made that speech saying, ‘you won’t have Nixon to kick around anymore.’ Felt like a dog. Just like a bloody dog. But I didn’t stay down. That’s not me. It’s in my blood; to get up and fight. And I even told Pat back then… I told her... Pat… thank God I’ve got Pat… you know… I used to drive her around on dates… when I first met her… I used to… used to drive her around… Jack Kennedy could get any girl he wanted… Jackie… Marilyn… but me… I used to be Pat’s fucking chauffeur while some swinging dick was in the back seat necking her… Christ I’m a fool! This entire time, a Goddamned irredeemable fool!

Nixon collapses and begins to SOB. Checkers walks over, rubs his snout against Nixon and licks him some. Nixon SNIFFLES.

Nixon kisses Checkers between the eyes. Regaining his composure, Nixon returns to his chair. A beat and he realizes the TAPE RECORDER has been running.

Nixon presses a button to rewind the tape, producing a HIGH-PITCHED SQUEAL. When the tape returns to its origin he promptly smacks one last button.

He sips his scotch.

My Dinner With Hillary 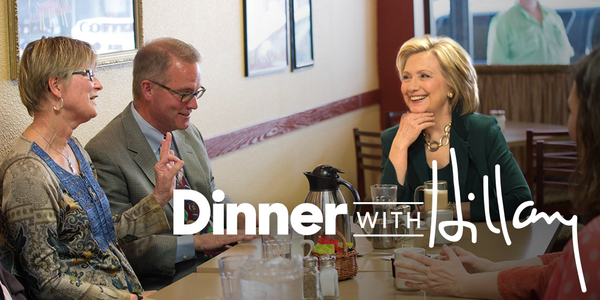 What Harm Could One More Tax Do? 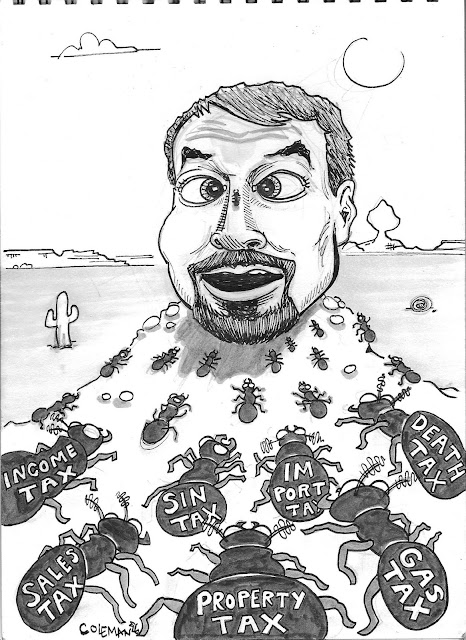 In the Style of Thomas Nast... 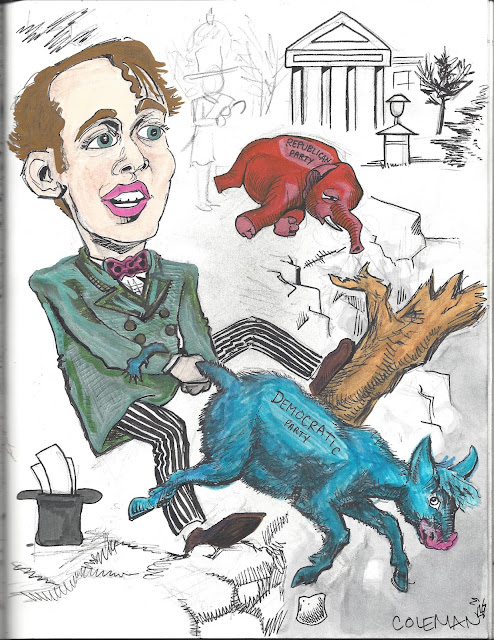 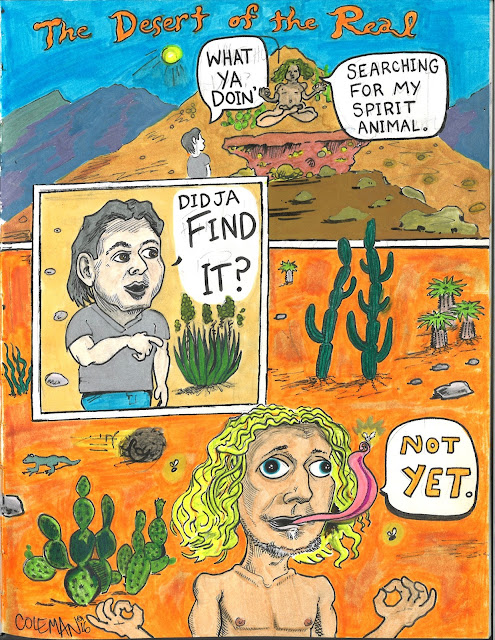 A scorching sun sets, at which point the dusty denizens of the desert breathe a collective sigh of relief. The desert; where the plants and animals have adapted and mutated to survive this barren alien landscape. The desert; where life simply refuses to die. The amber glow of the distant hydrogen helium orb receeds behind the mountain bringing with it a sublime darkness. Lizards squirm out from under their rocks and people leave their air conditioned homes. The dark is the bats' playground... oh god.... the bats.... 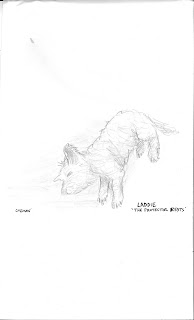