The Character Assassination of Donald Trump 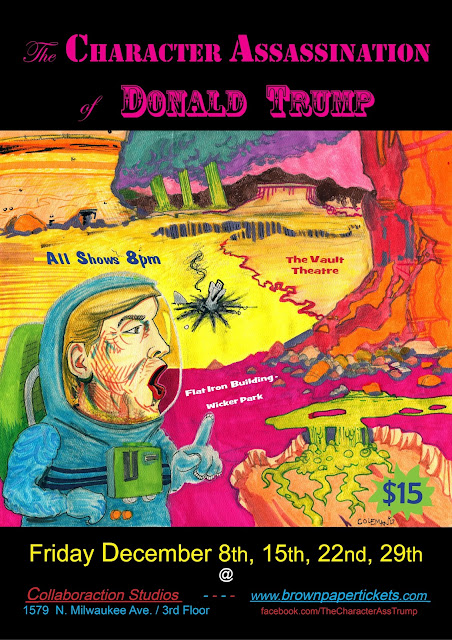 The show came together in a slip-shod, frenzied,  Buddhist happy accident kind of way. The idea was had while driving around delivering pizzas; Trump's impeachment Trial as a variety show.  The first Friday of the month Wicker Park's historic Flat Iron Building has an open house. And it was there, at this Artists' Colony that we bumped into Anthony Moseley, the Big Wig of Collaboraction Theater. Me and the Great Dave McGrath pitched Anthony on a Trump variety show and he informed us that they had nothing slated for December and that we should shoot him on over a script. Some weeks later the green light given, the space secured, and now is was up to me, Dave, and Jenny Miller to round up talent. I've had enough of actors, seems all young actors care about is money. So we began recruiting characters and assorted mutants from the Mutiny; a local dive bar which hosts a slew of open mic nights hosted by some incredibly talented comics. A couple script run throughs and we were ready to unleash the Hambach! By the way, if you're in the neighborhood, you really must check out the Mutiny's Heckle Mic Friday night... it's evolving and becoming sentient...


Opening night was a riot. Riding high on adrenaline we were gearing up for the next when the email was received. It was Patti the pole dancer, the gal that had recruited all the Burlesque dancers from upcoming shows, with a bombshell. They were backing out. Something about not having read the script, not bothering to listen to song, ‘but at the amount we are being paid, being uncomfortable with the subject matter’, on and on. No problem, we just had to scramble to find one Belly Dancer to replace three sub-par Burlesque dancers at $50 bucks a pop. #metwothree 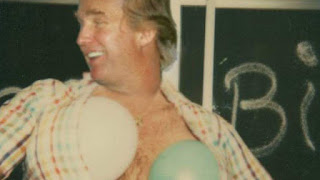 There was a critic there opening night, Jack Helbig. The audience, albeit packed with friends, loved the show. ‘It checked a lot of boxes,’ as Elaine put it. Yet when the review surfaced the following Wednesday we were told to pack it in by a saddo who completely discounted the audience’s take.
https://www.chicagoreader.com/chicago/the-character-assassination-of-donald-trump/Event?oid=37780738

I was livid. I was gonna chip golf balls (actual ping-pong balls) at the side of the (Un)Reader(able) building and storm the CPU dressed as Trump and demand to speak to this Hel(of)big(loser) with cameras rolling. That didn’t happen but we got back our mojo by the third show. The show where Michael Johnson wore his psychedelic Christmas hat. That was the best show; however, according to meta-physics, it couldn’t be recorded. 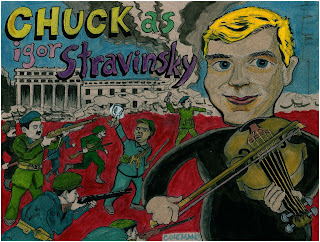 It's going to be huge. Whether you are hoping for it or dreading it, everyone can agree that if Trump gets impeached, the trial will be one tremendously wild ride. Politicians and the media will make it a circus larger than Cirque du Soliel. This wacky satirical comedy turns that pending circus into a variety show complete with music, magic and burlesque. This is one jury duty you won't want to be excused from. You can bear witness to The Character Assassination of Donald Trump at Collaboraction Theatre. 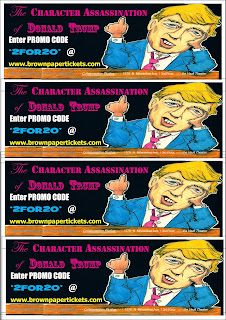 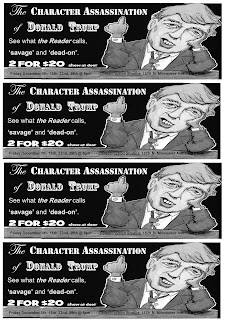 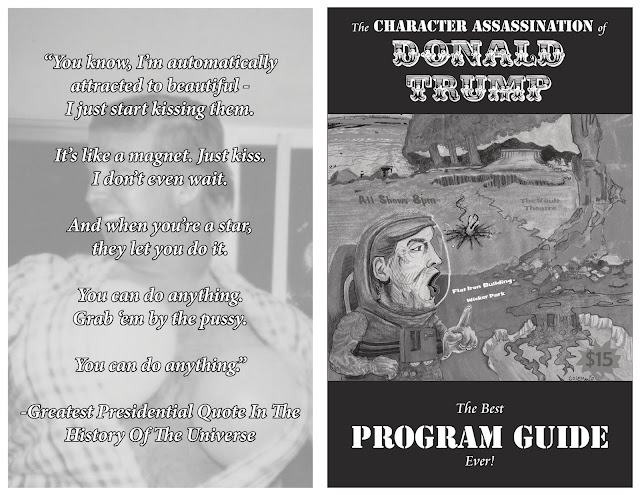 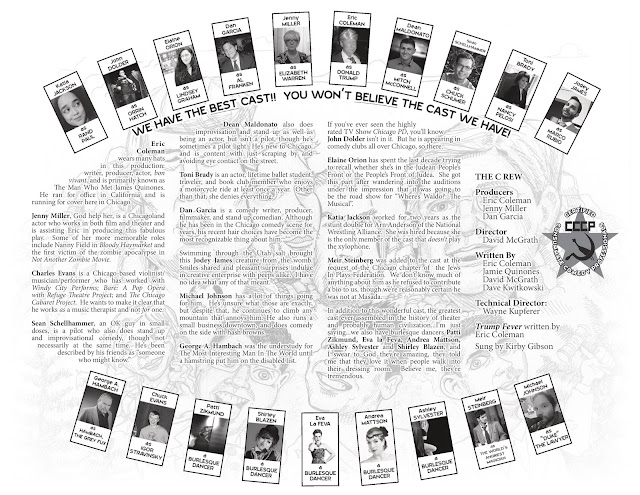 There’s always a little melancholy at the end of a run. The show’s over, the family disbands, and the shared purpose dissipates. Ah well. See ya at the next show! If I haven't been blackballed by the entire Chicago theater community. Ha Ha 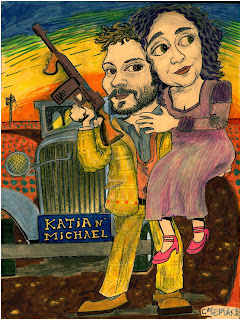 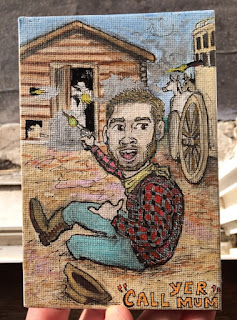