Why are elections on a Tuesday?

What type of government does America have?

What is the ELECTORAL COLLEGE?

The 2020 presidential election looks set to be one of the most contested – and divisive – in recent history. Here, historian Peter Ling looks back at other controversial elections in history, from Abraham Lincoln’s victory in 1860 to George W Bush’s triumph over Al Gore in 2000, and asks what we can learn…

History, Mark Twain is said to have declared, doesn’t repeat itself, but sometimes it rhymes. The 2020 election between Donald Trump and Joe Biden is shaping up to be a controversial contest, even more contentious than Trump’s 2016 Electoral College victory. What can earlier controversial elections lead us to expect this year?

The first disputed election signals the connection between controversy and partisanship. In 1800, Thomas Jefferson and Aaron Burr received the same number of Electoral College votes (73 apiece). Each state is permitted one elector for each US Senator [so always two] and one elector for each Congressman in the House [which varied according to population, giving populous states more electors]. Up until this time each elector had been allowed two votes and the vice presidency was awarded to the second-ranked candidate. The Constitution placed the decision with the House of Representatives.

It took 36 separate votes to award the presidency to Thomas Jefferson and the process deepened personal and party divisions. The ambitious Burr, who had ostensibly run for the vice-presidency, felt cheated, and blamed his loss chiefly on Alexander Hamilton (recently celebrated in Lin-Manuel Miranda’s hit musical), because Hamilton had persuaded Federalists from Maryland and Vermont to abstain, giving those states to Jefferson. Their feud culminated in a duel and Hamilton’s death in 1804.

While Jefferson used his 1801 inaugural address to call for bipartisan unity, declaring “We are all Republicans, we are all Federalists”, party tensions produced both virulent press coverage and threats of secession. To reduce the likelihood of an Electoral College tie, the Twelfth Amendment was ratified in 1804 and required a separate vote for the vice-presidency. The rise of the party system and of a combined ticket of president and vice-president ultimately solved the problem. 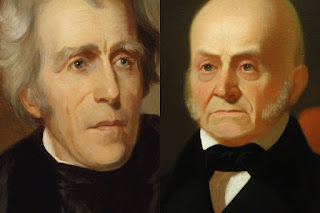 Andrew Jackson, a war hero and a western challenger to the East Coast monopoly on presidents (all had been Virginians, apart from John Adams of Massachusetts), won both the popular vote and the most votes in the Electoral College. But the Constitution requires the president to secure an absolute majority, and in a crowded field, Jackson was opposed by John Quincy Adams (son of the second president), William H Crawford, and Henry Clay. The top three candidates faced a vote in the House, which eliminated the fourth-placed Clay, and Crawford had suffered a stroke (effectively ending his candidacy), so it was a choice of Jackson or Adams.

Given Clay’s influence as House Speaker, the result lay largely with his so-called ‘Whig’ faction, which was hostile to Jackson. When President Adams made Clay his Secretary of State, Jackson and his followers erupted with cries of a “corrupt bargain”. A favourite of Donald Trump, Jackson is seen as the first ‘populist’ presidential candidate, claiming to speak for the common man and to oppose the swamp of corruption in the nation’s capital. His defeat to Adams triggered demands for the president to be chosen by the popular vote at a time when most American states were abolishing property qualifications for voting as a relic of ‘Old World privilege’ which might corrupt the democratic Republic.

Jackson was avenged by victory over Adams in 1828 and Trump has manoeuvred to ensure that he remains on the $20 bill rather than being displaced by African-American heroine, Harriet Tubman. Ironically, Trump’s own victory in 2016 prompted calls to abolish the Electoral College.

Multiple candidacies and the deepening north-south divide over slavery ensured that this election was the most contentious in American history. Abraham Lincoln’s victory with just 40 per cent of the popular vote sparked the secession of first state, South Carolina, and then six further states, even before he was inaugurated. Lincoln was the standard bearer for the new Republican Party [founded in 1854] that opposed the extension of slavery into new western territories, and some southern states had responded by ensuring that he wasn’t even on the ballot; he won only northern states. 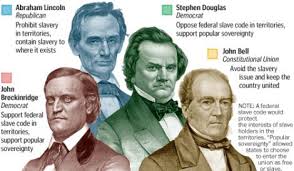 Democratic party managers chose as their nominee Stephen Douglas, who had defeated Lincoln in the 1858 Senate race in Illinois. But southern Democrats nominated Vice-President John Breckinridge to defend their interests and he, along with Senator John Bell of Tennessee, who ran for a newly formed Constitutional Union Party, siphoned off southern support. As a result, despite having the second-highest popular vote total, Douglas won just the border state of Missouri.

Believing Republican victory threatened slavery, the south was swept by secessionist fever, and the drift to war began. This remains the nightmare scenario that if sizable portions of the electorate refuse to accept the result in 2020, violence will ensue.

1876 – Samuel Tilden and Rutherford B Hayes

In the aftermath of the Civil War, the defeated south faced a Republican-dominated federal government, which made attempts to reconstruct the southern states politically and foster northern-style economic development. By 1876, such efforts had faltered due to divisions between moderates and radicals and intense local white southern resistance. The Republican governments, at both state and national levels, had been tainted by scandals, often involving corrupt deals between politicians and businessmen, and a deep economic depression after 1873 had shaken the nation. This prompted voters in 1874 to elect a Democratic majority in the House for the first time since the war.

Samuel Tilden of New York as the Democratic nominee benefitted in 1876, comfortably winning the popular vote and leading in the Electoral College. Controversy surrounding election results in Florida, Louisiana, and South Carolina, and over the selection of one of Oregon’s electors, denied Tilden the one vote he needed for an Electoral College victory. With the College unable to meet due to the absence of electors from four states and no resolution in sight as Congress returned in early 1877, political leaders solved this constitutional crisis by forming a bipartisan commission.

Behind the scenes, southern leaders reached a deal with supporters of the Republican candidate Rutherford B Hayes. They awarded the votes of the three contested states to Hayes, carrying him to victory, and Hayes agreed to withdraw federal troops still garrisoned in former Confederate states to cow the ‘rebels’ and thereby restore southern “self-government”. This so-called ‘Compromise of 1877’ calmed fears of a second civil war, but only at the expense of allowing southern state governments to reverse the incomplete efforts to protect the rights of the formerly enslaved.

Black southerners paid a heavy price. They had been the Republican core vote in the south and in the midst of a wave of lynching, aimed at terrorising the black population, white southern elites introduced rules like literacy tests and poll tax requirements for voting that shrank the electorate in ways that excluded African-Americans. Beginning in the cities and extending from transport to the rest of public life, all-white Democratic governments passed segregation laws to protect and proclaim white supremacy.

Despite his posthumous reputation, John F Kennedy was not the clear choice of most Americans when he ran against Richard Nixon in 1960. He got 49.9 per cent of the popular vote compared to Nixon’s 49.8 per cent. Nixon carried more states, but with fewer Electoral College votes.

Crucial to Kennedy’s victory were the two states of Illinois and Texas. In Illinois, there were strong suggestions that the Chicago Democratic machine had used its proven ability to swing the state his way. The rumours were that Kennedy’s millionaire father, Joseph, had made payments to Mafia-linked bosses to guarantee the outcome. In Texas, Kennedy’s choice of its powerful senator Lyndon Johnson ensured that the vote and the count was carefully managed in Kennedy’s favour, especially in counties where Hispanic and African-American voting was encouraged or discouraged by local leaders.

Urged to contest the result, Nixon decided not to do so; ostensibly to protect the nation at a time of growing tensions with the USSR, but equally because he knew that in Illinois there had been suspect pro-Republican actions by voting officials.

Most would see Trump and JFK as a study in contrast, but both benefitted from family wealth to fund their campaigns and both adapted to changing media formats (televised debates in Kennedy’s case and ‘reality TV’ and targeted social media messaging in the case of Trump).

In 2000, with only Florida’s results pending, the Electoral College tally gave Democrat Al Gore 267 votes and Republican George W Bush 246 votes; so, whoever took Florida’s 25 votes had won. But the Florida race was extremely close and voting problems had been reported. As legal challenges and recounts continued for weeks, two technical issues gained notoriety. Some punch-card ballot machines had not produced cleanly punched cards, leaving “hanging chads” that had to be inspected to decide which candidate a voter had chosen. The process of voting correctly had also been complicated by locally designed ballots, one of which – the so-called ‘butterfly’ – had the list of potential candidates printed across two pages with the punch holes in the centre.

Headed by Bush’s brother, Jeb, Florida’s state government called the result for Bush on 26 November by a margin of just 537 votes. Unsurprisingly, legal challenges demanding a recount in selected counties continued until finally, on 12 December, the US Supreme Court in Bush v Gore ruled that recounting must stop, and effectively made Bush president.

There were continuing suspicions that the result was a product of voter suppression [a term used to describe a variety of measures that make registering to vote and voting more complicated] in minority districts and partisan manipulation. For example, in Republican-controlled counties there were strong suggestions that absentee ballots that favoured Bush had been treated differently from those that favoured Gore. Despite this, Gore conceded. Arguably, the country only reunited under Bush after the 9/11 attacks.

Trump’s 2016 victory, secured by winning key Electoral College states like Florida, Michigan, Wisconsin and Pennsylvania, by a barely 2 per cent margin, was partly attributed to a social media messaging campaign that galvanised his core supporters and deterred potential Clinton voters. The House Intelligence Committee has now confirmed that the Russian government systematically interfered in the election in ways that bolstered this messaging campaign as a way of inflaming pre-existing social divisions.

This recent history has set the tone for the 2020 campaign, with Trump deriding his critics as sore losers who have never accepted his victory and warning his supporters that large-scale postal voting – in response to the Coronavirus pandemic – will enable his opponent to steal the White House. In Pennsylvania, Republican election officials have declared that any ballot that is not placed in its internal envelope before being inserted in the return envelope – a so-called ‘naked ballot’ – will be discounted. We must wait and see if naked ballots are the next “hanging chad”, or whether 2020 rhymes with other past disputes; either way, it will certainly make history.

Written by Peter Ling, emeritus professor of American Studies at the University of Nottingham 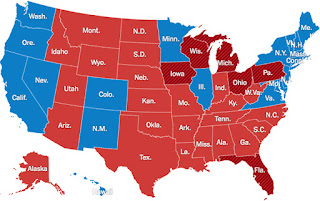 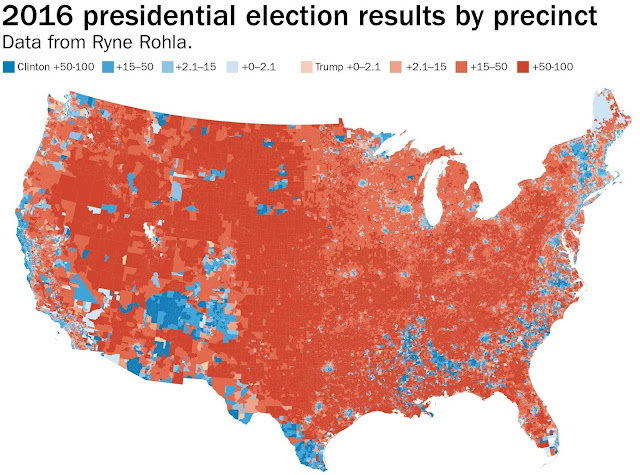