The Butcher, the Baker, and the Kilowatt Maker

The door-in-the-face (DITF) technique, similar to the Overton Theory, is a compliance method commonly studied in social psychology. The persuader attempts to convince the respondent to comply by making a large request that the respondent will most likely turn down; much like a metaphorical slamming of a door in the persuader's face. The respondent is then more likely to agree to a second, more reasonable request, compared to the same reasonable request made in isolation.

As far as I see it the AES debacle started a long time ago.
Back in the good old disco days, for some reason that probably involves graft, Southern California Edison was given an exemption when it came to pay the U.U.T. or Utility Users Tax.

In 1998 Edison sold the plant to AES for peanuts under the condition Edison wouldn't have to clean up the site before sale. In December of 1998 the city entered into a M.O.U. or Memorandum Of Understanding with AES and Williams Gas Marketing. That understanding was that AES got to keep Edison's tax exemption.

Then, in 2005, the city sent a letter to Williams Gas Marketing demanding 72 million in back taxes; that amount later being reduced to 56 million. AES filed a complaint in court. The city filed a cross complaint. Both citing the MOU. This goes back and forth for years and finally the city wins and gets a check for 56 million smackers; but that's not the end of the story.
In an appeal Judge Janavs reverses the previous courts decision and forces the city to give back the money. I wonder who Judge Janavs' campaign contributors were? Judge Janavs also ruled no further appeals will be heard by her court.

If we go up against AES again can we really win? After all the court costs and attorney fees are added up will we, the tax payer, be left holding the bag? And are the City Council officials who are passively calling for the plant's dismantling, the very same ones who were in office in 2008 and signed that agreement, really just doing all this to court voters? 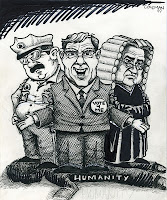 Lastly, in regards to the MOU, who is responsible to clean up that land? While a Memorandum of Understanding isn't quite as good as a contract; I suppose it's better than an I heard it at the water cooler understanding. In that agreement AES was given the same exemption that Edison got. Oddly enough; AES sells its electricity to Edison. Is this a bait and switch, so Edison wouldn't have to tidy up before they left. How toxic is that soil? Where is the Environmental Impact Report? Why didn't our City Council do it's job ?

I think the elephant in the room is Edison who has stated, categorically, they have absolutely no intention to remove the power lines that run up 190th Street. AES is the patsy. If we want to make a dent in this thing let's go up against Edison and skin the fat cats for what they've done to our land. Edison has a long history of operating shell games. Who else would publicly fry an elephant just to prove a point about how dangerous Alternating Current is compared to DC, his electricity? Incidentally, we use AC now, it's much more efficient and won out despite Thomas Edison's attempts to stifle it. Times Square still smells of burnt elephant hair; and the AES plant's reactivation looms on our horizon. City Council won't directly come out against AES while decrying potential future pollution from that plant every chance they get because, ultimately, they will side with the company's second plan for a smaller more energy efficient plant and make sociologists proud in the process. Door in the face; oldest trick in the book. Well, not on my watch Redondo.