As my friend and occasional Tony Bennet stand in, Robert Heart, pointed out to me;

Something to remember: None other than Otto Von Bismarck ('laws are like sausage - it's better not to see them being made') observed that the British democratic system had a peculiar quirk: Conservative governments seemed to pass liberal laws, and liberal governments passed conservative laws. And look at the past 40 years: Clinton rolled back welfare - GW Bush *expanded* Medicare benefits. Nixon made peace with Mao's China - Carter appointed 'inflation hawk' Paul Volcker to the Fed. It's uncanny really.

Furthermore, periodically throughout history, Utopian dreams have ended up being draconian nightmares. We saw it in The French Revolution when the mob, (called the Council on Public Safety) turned so ugly they finally guillotined their head executioner Maximillien Robespierre. Under Stalin's five year plan rations were endured and dissenters were met with gulags, Cossacks, or residency in a Siberian stone splitting yard. Now, again, we're seeing proposed changes to the social order with the Blue Zone. I guess it's like Richard Nixon said, "you can fool some of the people all of the time, and all of the people some of the time, and the rest you carpet bomb back into the Stone Age."
QUIZ TIME!

1. What is the Blue Zone?
A: Thrilling New Theme Park Attraction.
B: Social Engineering Scheme.
C: A new brand of yogurt.
D: All of the above.

If you guessed D, you're right on the money. And there's a fairly large pot at stake; 2 million dollars to be exact.

It was in beating out 55 other cities, Redondo Beach won the opportunity to be 'transformed' by some company from Minnesota. The company, Healthways, courted Beach Cities Health District and in the process left their Board of Directors tickled absolutely pink. The Blue Zone Vitality Project TM stated motto is "Live Longer, Better", without much mention of how this is going to occur other than largely symbolic gestures. Moreover, I suspect we, the tax payer, will find ourselves holding the bag like the winner of a shoddy Extreme Make-Over TV show, where they build us a home facade we can't afford, and that raises our property taxes to the point of eviction. The whole mess reminds me another Vietnam era quote, "at some point it became necessary to destroy the village to save it."

Let's face it; if we really want to change the world widening bike lanes, putting in an extra crosswalk, and turning a power plant into a park will not lead to our salvation as a species. And what should we do minus the AES plant? Lest we forget, many are still without power following Hurricane Sandy, and many from Hurricane Katrina are still waiting for their ice. Getting serious about global warming requires a radical reversal in the way we operate. For instance there is a floating island of plastic goods called 'The Great Pacific Garbage Patch' that is hardly ever addressed. More realistic solutions to the problem of climate change include Coleman's One Cup Solution: everybody gets one cup, so put your name on the side of your cup, cause you're not getting another one. Either that or hooking up equipment at the gym to the electrical grid and harnessing power that way.

Lastly I mention the red cars which used to frequent our fair community. The strip of land currently being utilized for jogging and exercise known as the greenbelt was once a light rail track that connected the beach cities. Circa mid 20th century, General Motors and Firestone bought up the line only to tear it up and use Los Angeles as a test case to see if people will hold their elected officials accountable in rebuilding one of the most efficient trolley and light rail systems in the world, at the time; or will they just break down and buy cars? We all know which way that fight went. Similarly, I surmise Healthways has their own interests in mind. Basically it boils down to, what do we really care about; quantity of life or quality of life? Is this really a plan to help people live longer, or just another another scheme to make lawyers rich and raise our taxes in the process? What of the people who don't follow the rigid health regiment? Will the hand of tolerance be extended to them or is something else in store?

Perhaps Robespierre said it best, right before he had is head lopped off, "pity is treason." 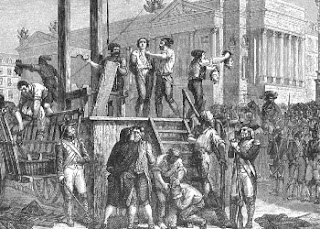