THE SILENT DEATH OF DEMOCRACY

In America we are told we have choice between Pepsi and Coke, McDonalds or Burger King, Democrats or Republicans. In 2000 a Toshiba commercial referring to its laptop computer capabilities made this advertising pitch; ‘what if they made a freedom machine.’ The fast and silent death of democracy is upon us.
Begun as a noble experiment, democracy was envisioned by the founding fathers to be the last phase in the evolution of government. It was thought that the masses would finally have a voice in their collective destinies. Unfortunately, it was only a matter of time until the ruling class discovered how to use this new political machinery for their own short-sighted interests.

Democracy is based on the concept that a contract exists between the government and the people. Power structures in a free nation must be continually legitimized. If the government ever becomes tyrannical and oppressive the people have not only the right, but also the duty to cast off the corrupt regime and restore a new order. However, if the Boston Tea party were to take place today the authorities would quickly be dispatched, delinquents rounded up, and in a couple months, the offenders would stand behind many other victimless criminals in line for the ATM of justice. 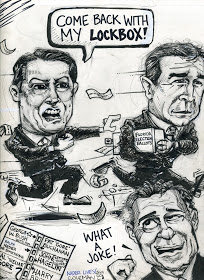 From Masons to Soccer Moms, special interests have long played a part in the political arena. They now have a stranglehold on our democracy. The people are so disillusioned and disaffected by their political system that over 50% choice apathy as the standard. At this point, there is no consent of the people and no true democracy. Democracy’s status was upgraded to critical during the November 7th  2000 elections and diagnosis made terminal on December 9th when the Supreme Court did what many saw as installing a president. George W. Bush’s ascension to power mimicked that of a legal coup.

CHIPPING AWAY AT THE FOUNDATION

At the time of the constitutional convention corporations only existed because of a charter which stated their purpose and how it was beneficial to the public good. The cancerous mutation of the corporate mission has progressed with the rise of the globalized marketplace. The tumor was visible from the surface in the Santa Clara County vs. Southern Pacific Railroad decision in which private tyrannies were granted the same rights as a ‘natural person’ protected by the Bill of Rights and the 14th Amendment. Corporations, with their armies of lawyers, greater access to resources, and seemingly unlimited funds are far from equal with the individual. And yet in 1886 a new entity was born. Another force took root in democracy. A government for, by, and of the people could no longer be defined. Basic enlightenment ideas like Hume’s, Touqueville’s, and Descartes' that people have the right to control their own work are relics today.

Human beings are incredibly malleable. Nature shows us that we are a tribal animal. Early man had to work together to preserve themselves. Industrialization brought a price with it. New technology can produce a syrupy carbonated beverage for 65 cents but clean water must be bottled and sold for a buck. Man may belong to the corporate tribe but he remains distant from his fellow man. The worst of men have subdued nature in the interest of profits. Historically the divisions among humanity can be traced back to an effort by the ruling class to distract from their practices. Why have we not been taught in schools that an alternate reality is possible? We must be told what we want which is evident when 1 in every 6 dollars spent in our economy is on marketing. The corporate branch off of the public relations industry emerged parallel with mass communication devices capable of molding the thoughts, attitudes, and beliefs of man.
During the bitter labor union struggle of the 19th and 20th century, the perverse science of leading public opinion evolved into a high art. Of the information gathered on the psyche much of it has been devoted to instilling wants and desires where they previously didn’t exist. The tax-free marketing industry furthered the warping of culture by painting the business community as heroic fighters for the American way of life we all enjoy. If anyone mentioned that the masses only get to enjoy the brief portion of their day when they are not under wage-slavery they were instantly discredited as a communist. Corporate America coerced government into forming senate subcommittees, modern day witch hunts to investigate and denounce these threats to elite. Radicals will eat your family read the propaganda. Few found the truth that corporations through monopolies, conglomerations, price fixing, and other uncompetitive market practices are actually huge communist structures. 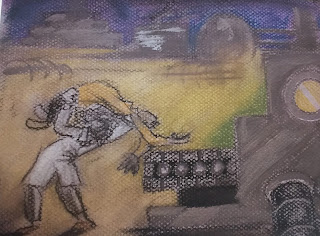 Regardless if you consider the television media overly leftist or if you find the AM radio media rampantly conservative one thing must be obvious, media in general is disgustingly corporate. With quiet passage of the Telecommunications Act of 1996 by a Republican-dominated Senate the publicly built institution was to be privatized. With nothing more than a whimper from the public watchdogs that interpreted the world for us every night at 6:30. Corporations as large as states had been given the green light at gobbling up enormous chunks of Americans connection to anything else outside themselves. The TV talking heads and pundit fluffsters never muttered the question; can free speech be maintained without a free press.
Four conglomerate corporations have seized 90% of the media. The current popularity of viewing the world with your head up your own ass is a conscious manipulation of the franchise culture. The public has been marginalized and sold a version of reality with a laugh track. Witnessing mindless commercialism cannot even be avoided on the drive to work. Every election cycle quasi-sincere attempts are made by celebrities and other modern gods to register people to vote with little success. The masses have been turned off to politics, probably because beer does more to help the average Americans life.
There are still politicians who care more about the people’s concerns than where their next re-election campaign contribution is coming from. The problem is unless someone is watching C-SPAN at 3 in the morning on a Sunday night will a dissenting voice be heard. Not until we find the time between the commute home and evening classes to pick up a copy of an independent publication at only the rarest of newsstands will we ever break the duopoly extending the curtain call on our political stage. 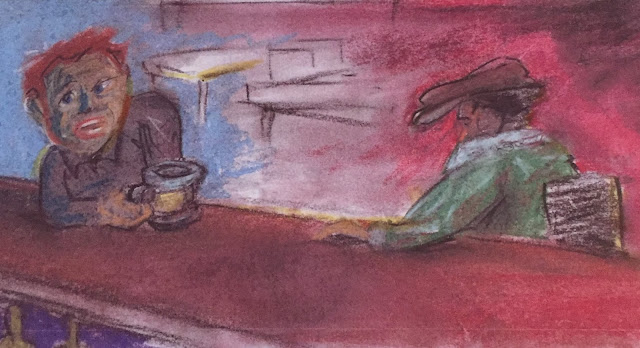 There are many incidents in America's past that would make our government null and void. After WWII the U.S. government was driven underground. In the 1980’s the people were completely separated from many of the agencies erected for the public's protection. These secret institutions have done much more than deny access to knowledge of their activities. The CIA (Completely Illegal Agency) actually circumvented democracy in Italy after WWII. Italy had a strong labor party and when the allied troops liberated the region in 1943-44 they found Northern Italy had already been freed by the resistance. Worker control of the factories was in place. The elections of 1948 looked to popularly elect the worker and peasant-based organization. The CIA (Crack Importing Agency) could not believe that the traditional power hierarchy had fallen, worthless workers were being kept and bosses were being arbitrarily dismissed. In 1947 food was withheld, police restored to fascist control, and documents like NSC1 were produced. The CIA states in NSC1 that if ‘the communists’ come to power through a legal vote the United States will declare a national emergency and support military activities inside Italy to overthrow the democratically elected government. Similar situations have been seen in Greece, Nicaragua, El Salvador, and Cuba.

WHERE WE STAND TODAY

Where we stand today is grim. And the prospects for a future seem even bleaker. As long as Americans remain egocentric and continue collecting toys to prove their freedom the world will only slip deeper into an unannounced oligarchy. Corporations will exhaust the earth’s resources and destroy the environment in the name of capitalism and the free-market. More people will realize their vote really doesn’t matter. This is the point in the essay where I could offer some encouraging words on how democracy could be revived but I think we’ve been lied to for far too long. There is always hope, but when one examines how probable a sobering effect occurs. The bastards have succeeded in pre-packaging humanity.


After reading this collection of ideas if you consider me in any way un-American, first think about that term. Since at one time slavery and the systematic slaughter of the Indians was very American. There is no such thing as common sense, war has been used throughout history to revitalize the economy, and in 200 years we’ll all be proven wrong. Just give a homeless person a buck, even if it does go to booze.

P.S. I think I got a C- on this paper and basically wrote it to spite my conservative Political Science teacher at El Camino College, who always referred to China as 'Red China'.
2001 was also the year where my College newspaper 'The Union' (formerly 'The Warhoop' or 'The Warwhoop')  refused to print my cartoon and went with the other staff cartoonist. I opened the September 21st issue of the paper to find David Pham's cartoon instead of mine. Pham's call for blood depicted a duck-faced Statue of Liberty crying as helicopters flew off over the ocean to indiscriminately kill brown people. Here it was poignantly reprinted by the Legendary 'Ad Infinitum Magazine'. 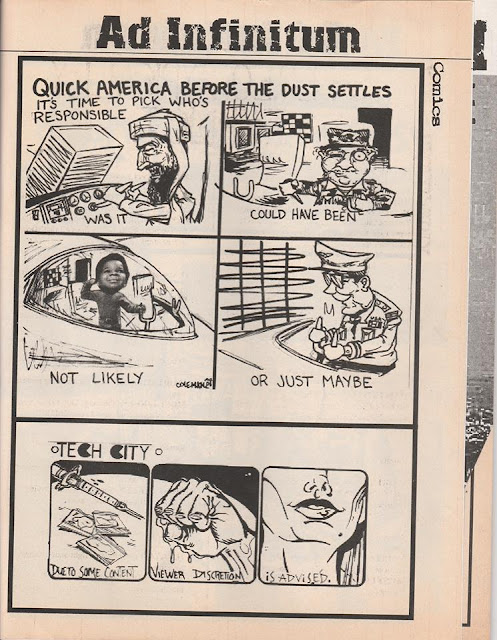