In all my years as an Animal Control Officer, I have never experienced anything as terrifying as the night of May 26th, 1988. I was responding to a call of strange animals underneath the Redondo Beach Pier when I came upon a scene of such unspeakable carnage that it has taken me 30 trembling years to even begin to describe what happened that night.

The station had gotten a call about raccoons under the pier and I radioed in that I would check it out. Parking the containment van, I made my way to where the sand met the surf. Faintly an Amber glow trickled from the pilings. Punk kids, I thought. The wet earth crunched under my boots as I rounded the corner.

There was the Fire Department Chief perched, teetering on an obsidian stone. I recognized his weathered sooty face from the newspapers; youngest Battalion Captain in Redondo's history. He struck a match and watched it burn.

Without so much as giving me a glance he spoke, "Can I help you?"

A bit jarred I replied, "Oh I'm sorry I thought you were... I mean, we got a call about some wild animals..."

He twirled the match in his yellowed thumb and pointer. "What type of... wild animals?" He asked in a lecherously somber tone.

The light was waning between his fingers. His voice cracked and reached a frequency only struck by the half mad.

"Raccoons... Huh? Ain't seen none of this them... however, if you're looking for a wild animal... you've come to the right place."

With that the Chief threw back his head and began to howl. I didn't know what to make of it. Is he serious? Could this all be some savage acid flashback? Abruptly he halted his barking and lit another match amongst the pier pilings. And another. And another. The Chief peered at me above the fire.

"I said, What do they call you? What's your name?"

"Seamus, sir. They call me Seamus."

The Chief turned his attention back to the dancing flame in front of him. "Yeah, that's a great story... Hey Seamus... Seamus, have you ever held onto a thought for so long, Seamus, that that thought became you… a thought that absorbed you, your ego like an amoeba who sucks up the whole pond, drop by drop, until it is the lake? A big slimy gelatinous lake.'

I leaned against a piling for a moment and finally muttered, "no."

With that, the Chief let out a roaring laugh that threatened to tear apart the Pier and bury us alive. His voice bounced across the ocean's crests.

Pivoting, I was about to leave, get away from this madhouse, when the Chief beckoned for me to come back.

Reluctantly I shuffled to meet the Chief on his rock throne. When I got closer I realized his face looked as if it were carved from clay. Heavily it weighed on his face. This monster wore a cheap skin suit, merely a husk.

He rolled his head, looked up at me like a lizard and spoke, "Tomorrow will be the Anniversary of one of the worst fires in Redondo's history... I was there. First on the scene. Apartment fire. Beryl and Prospect. I remember seeing the purple-tinged flames shooting up from the building, the mark of an accelerant..."

The Chief stuck his meaty claw deep into the wet earth and produced a hand full of mud.

He continued, "Later the investigation showed that the fire was an act of revenge taken against a man who'd made enemies of some high school football players... like anyone'd believe that. Ho ho."

Soon the Chief's mug was covered in mud. The Chief drew a line down his forehead and across his cheeks, like a Native American preparing for war, while he prattled on, "the man made it out alive, but others... others weren't so lucky. Two flight attendants and a boat captain in the apartment above... they were screaming... trapped up there... I watched them cook..."

The mud monster lit another match.  The light waltzed across his twisting face.

This was too much. I had had enough. I turned to leave and that's when his words struck me... first on the scene... Whipping back around the Chief lingered in my peripheral, he had put on the pelt of an animal. On top of the Chief's head was a skinned raccoon snout. Blood ran down the Chief's face mixing with mud. The beast snarled gleaming in the moonlight. Demonic laughing flooded my eardrums and threatened to detach my brain from its tether. It was at that moment I passed out from fright.

I awoke some hours later. The tide had come in. The Chief was gone. The raccoon's pelt was nowhere to be found. It was almost as if the whole thing was a dream. I went home and went to bed.

The next day, May 27th, the Pier burned.

This is what the newspaper read:

At 1:40 pm, the Redondo Beach Fire Department received its first call: “Station 1. Structural response. Breakers restaurant, 400 Fisherman’s Wharf. This is called in from Tony’s. They state there is  lot of smoke coming from under the building.”
Diners at Tony’s restaurant had seen wisps of smoke rising from beneath the Breakers Seafood Restaurant and notified the fire department.
The smoke came from a fire that had broken out underneath the Breakers from an unknown cause. The heat of the ensuing conflagration was so great that most clues as to its origin were destroyed, leaving the exact cause of the fire undetermined to this day.
Investigators later would theorize that electrical equipment and wiring knocked loose from high waves that had pounded the pier twice earlier in 1988 probably short-circuited beneath the restaurant and ignited the wooden pilings.
The pilings had been coated with creosote to make them water-resistant, but the substance also made the pilings burn easily and rapidly.

I will never know if Pat Aust was responsible, but I'll tell ya one thing, that night was one night where we both actually almost went completely insane and I'm glad I survived it, albeit just barely. 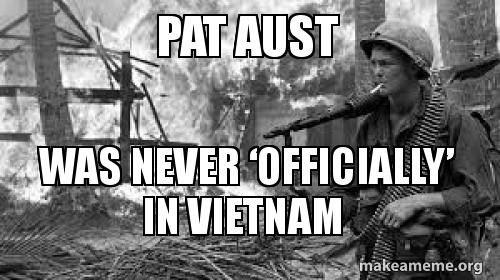