introductions - what's your name? Where are you from? And what would you like to do for work if money were no object?

MY THEATER BACKGROUND:
in chronological order

The Show with Jeremiah Fishberg and Mort Finklestein at Suzie's Bar and Grill, Wrote Starred in.

The Character Assassination of Donald Trump, co-wrote, co-produced, starred in. Put on at Collaberation Theater Chicago.


NOW ON TO THEATER BASICS...

Also, the sides of the stage are called the wings.

Blocking is movement around the stage, similar to choreography which involves dance. Blocking is the planned physical motions of actors that aid the storyline, convey the subtext of the dialogue, and help focus the audience's attention. It's a collaborative process between the director and the actors, that emphasizes what the characters might naturally do in any given situation. In major theatrical productions, every movement, or lack of movement, on stage originates with this planning process, including the proximity of the actors to other actors.

Moving to or from different parts of a stage results in more powerful or less powerful movements. A movement that approaches the audience expresses power, while a movement away from the audience expresses weakness. Similarly, a horizontal motion towards the center of the stage expresses more power. Conversely, a horizontal motion away from the center expresses less power. Performers use their understanding of movements and power to add emphasis to strong statements or important plot actions. They can also express weakness or a low point in a character's experience. Given the strong or weak aspects of body language, it becomes clear how actors, even without dialogue, can tell an entire story through motion.

Take this short scene from Alfred Hitchcock's Vertigo for instance, how would you block it. Work with a partner.

Additionally, it's important to plant your foot on stage so there is no temptation to turn and hide from the audience unless it's for dramatic effect.

When speaking about film, blocking is important as well as camera placement and framing the subjects.

Assignment: create a short video using one of these prompts or your own ideas...
https://www.musicbed.com/blog/inspiration/6-prompts-to-launch-your-next-short-film/

Often a problem for actors is projection, or using their voice so the audience can hear them. The key is speaking from your diaphragm (just above your stomach). 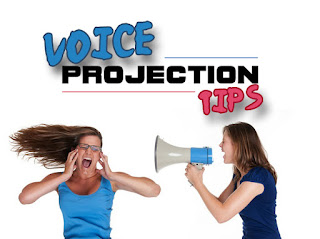 Breath Control and Projection are critical skills for an actor, but they’re just as critical for drama teachers. The trick is to speak loudly and project without yelling. We often tell our students to project, but what about us? Think about how many times you have to raise your voice in a day. Do you project or do you yell?

Why do we need to project instead of yell?

Yelling uses vocal cords, which can get damaged if overused. Projection uses breath from the diaphragm and uses air to create the volume you want.

How do I know if I’m yelling or projecting?

If your diaphragm is not doing the work of creating volume, your vocal cords are – something has to do the work. If you keep yelling, your throat will start to feel sore. Projection has a depth to the sound. It tends to have a slightly deeper pitch and a rounder, more complex sound. Yelling sounds flat with a higher pitch.

How do I learn to project my voice?

Breathing from the diaphragm is key to learning how to project. The ‘ha’ exercise is one that works very well to practice. You take a big breath in – expanding your lungs down and your abdomen out – and then you force all that air out on a “ha.” This exercise is built for projection. You are using all your air at once on one sound so you can force that sound out and be really loud with it. Using that much air sends your sound out far and that’s what you’re trying to do.

We can also use visualization to improve our projection. Since we are trying to get our sound to travel away from us, it can help to pick a spot on the wall opposite us and visualize your sound hitting that spot on the wall. It will let you focus on how far you want your sound to go.
1. Find several different-sized spaces. It might be a large room in which you can stand close, and then further away from a wall.
2. Find something to say. It might be a random sentence.
3. Stand close to the wall (or in a small space) and speak. Ask yourself:
a) Does the sound echo back? You should hear some echo, but not too much – enough to ensure you are being heard but not overly loud.
4. Once you have determined how loud you need to be in the space you’re in, look at how much air you use to speak at that volume. Keep track of how big of a breath you take in and how much air you let out.
5. Practice saying your phrase over and over until you’re sure you know how much air you need to be heard in the size space that you’re in.
6. Then, you move to a bigger space and repeat the exercise.
Soon yelling will be a thing of the past!
-------- 🎭🎬🎭🎢🎭🎼🎯🎭🎪🎭🏆🎭🎩🎭 -------
MEMORIZATION OF LINES:
You don't want to end up like Christopher Walken in Peter Pan Live ...

Tricks for remembering your lines from the New York Film Academy:

1. Write your lines out.

Running lines with a partner is one of the most well-known methods for memorizing lines. The key is to run lines with another actor — not your friend from down the street. Running lines with another actor holds you accountable. Allow the person to coach you and read stage direction to you. During the first run, you’ll want to listen to the words and absorb the script.
If you can’t find someone to help you run lines, try using the app Rehearsal 2. While the app is $19.99, it allows you to highlight lines in the app, record other characters’ lines, and use it as a teleprompter.
3. Quiz yourself.

Use a scrap piece of paper to cover up everything but the one line you are trying to memorize. Continue to read the same line over and over again. Once you feel comfortable, try reciting the line without looking at it. If you can, move on to the next line and start the process over again.
4. Go for a walk or take a nap.

In an article published by “Chicago Tribune,” Cindy Gold of Northwestern University suggests that after looking at lines, it is helpful to either go for a walk or take a nap. While you rest, the information your brain just processed moves from short-term memory to long-term recall, where you will be able to recall things easier. Also, when you walk, you are exercising muscles and that helps with memorization.
5. Use a mnemonic device.
You can use a mnemonic device to help you remember your lines. Try writing down the first letter of every word in your lines. When you look at those letters, it will help jog your memory and you’ll remember your line a bit easier. Think of the mnemonic device as a short cut.
6. Learn the cue lines.

Not only should you learn your lines, but you should learn your cue lines as well — these are the lines that lead into yours. By knowing the cue lines, you will be more prompt and you’ll be able to deliver your lines in a timely fashion.
NOW CHOOSE A MONOLOGUE FROM THIS WEBSITE ( https://www.filmsite.org/bestspeeches.html ) AND TRY A MEMORIZE A PORTION OF IT
Or here's another good site:
http://www.bhplayhouse.com/2-2-Men-Acting-Scenes/
-------- 🎭🎬🎭🎢🎭🎼🎯🎭🎪🎭🏆🎭🎩🎭 -------
Finally into the nuts and bolts of what we will be doing in this class...
The Play That Goes Wrong is a play within a play and one of the hottest plays running right now. 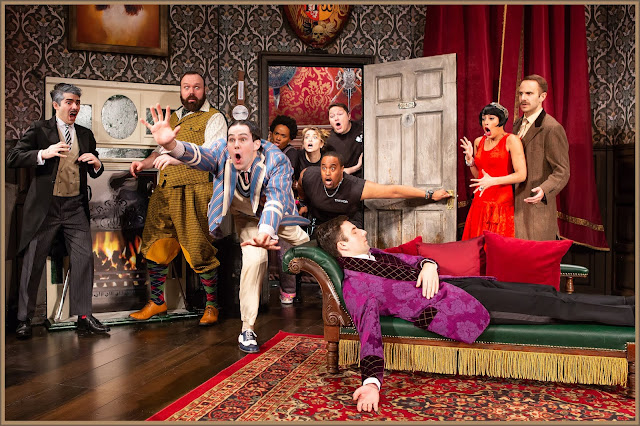 The Play That Goes Wrong begins before the curtain has even been raised, as the audience are present while the Cornley Polytechnic Drama Society prepare to stage their new production – the 1920s murder mystery 'Murder at Haversham Manor'. However the set is not yet complete and there is no time to finish it off…..the show must go on!
With a murder (and a moving corpse) established from the beginning, the murder mystery gets into full flow. However, the props start to disappear, actors go missing and the set begins to collapse around, and often on, the cast. Mayhem ensues, the acting gets worse, and the set becomes increasingly dangerous, but the company struggle on regardless. The question is whether any of the cast and crew will remain standing, or conscious, by the final curtain?!