Good idea to begin with warm up exercises and icebreakers to get more into the body.

Silent comedy is a style of film, related to but distinct from mime, invented to bring comedy into the medium of film in the silent film era (1900s–1920s) before a synchronized soundtrack which could include talking was technologically available for the majority of films. Silent comedy is still practiced, albeit much less frequently, and it has influenced comedy in modern media as well.
Many of the techniques of silent comedy were borrowed from vaudeville traditions with many silent comedies such as Buster Keaton and Charlie Chaplin getting their start in vaudeville. Silent comedies often place heavy emphasis on visual and physical humors, often including "sight gags", to tell stories and entertain the viewer. Many of these physical gags are exaggerated forms of violence which came to be called "slapstick". The "prat fall", slipping on a banana peel, getting soaked with water, and getting a pie thrown in one's face are all classic examples of slapstick comedy devices.

This all started at Brett's place on Friday night. We had a longing standing tradition of practicing our pratfalls once the evening's festivities got going. 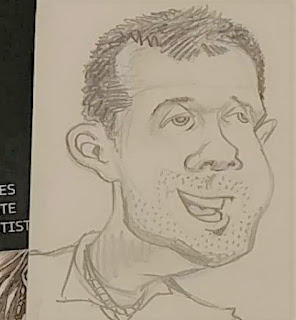 What are some Physical Comedians
you watched growing up? 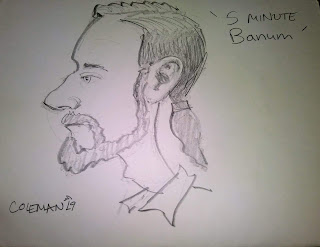 Or in Harold Llyod's case,

Physical comedy is important to us both and it reminds me of those distant days working out gags on Cable Access television. Operating out of Adelphia's studio in Hermosa Beach, me and friends cobbled together 14 episodes, which aired on channel 54 Tuesdays at 10pm. Named after what my High School English teacher wrote on my essay, the show's name was Flippant.

The hardest I've ever fallen on stage was during Ron Paul the Musical, written and produced by Cameron Ford. I was playing Ron Paul who was himself playing a punk rock Jello Biafra type in the scene. I hit the chorus and then jumped backward onto the stage. In addition to tips like 'follow through with the action you were doing before the slip' and 'grab onto something for help that only makes the situation worse', I remember the Director telling me not to fall so hard during rehearsal. He told me the audience identified more with the pain than with the joke. He was right. After I landed squarely on my back with a THUD, an audible GASP reverberated through the crowd. Moment watchable at 45:44 in the following video.

I don't regret it, but I do know have more of an appreciation for the original gangsters of comedy and their apparent control, especially when placing themselves in precarious predicaments.

Chaplin's childhood in London was one of poverty and hardship, as his father was absent and his mother struggled financially, and he was sent to a workhouse twice before the age of nine. When he was 14, his mother was committed to a mental asylum. Chaplin began performing at an early age, touring music halls and later working as a stage actor and comedian. At 19, he was signed to the prestigious Fred Karno company, which took him to America. He was scouted for the film industry and began appearing in 1914 for Keystone Studios. He soon developed the Tramp persona and formed a large fan base. He directed his own films and continued to hone his craft as he moved to the Essanay, Mutual, and First National corporations. By 1918, he was one of the best-known figures in the world.

The brothers were from a family of artists, and their musical talent was encouraged from an early age. Harpo was particularly talented, learning to play an estimated six different instruments throughout his career. He became a dedicated harpist, which gave him his nickname.[20] Chico was an excellent pianist, Groucho a guitarist and singer, and Zeppo a vocalist.
They got their start in vaudeville, where their uncle Albert Schönberg performed as Al Shean of Gallagher and Shean. Groucho's debut was in 1905, mainly as a singer. By 1907, he and Gummo were singing together as "The Three Nightingales" with Mabel O'Donnell.[21] The next year, Harpo became the fourth Nightingale and by 1910, the group briefly expanded to include their mother Minnie and their Aunt Hannah. The troupe was renamed "The Six Mascots".
Laurel and Hardy

Prior to emerging as a team, both actors had well-established film careers. Laurel had appeared in over 50 films as an actor (while also working as a writer and director), while Hardy had been in more than 250 productions. The two comedians had previously worked together as cast members on the film The Lucky Dog in 1921. However, they were not a comedy team at that time and it was not until 1926 that they appeared in a movie short together, when both separately signed contracts with the Hal Roach film studio.[3] Laurel and Hardy officially became a team in 1927 when they appeared together in the silent short film Putting Pants on Philip.

Keaton was born into a vaudeville family in Piqua, Kansas,[12] the small town where his mother, Myra Keaton (née Cutler), was when she went into labor. He was named "Joseph" to continue a tradition on his father's side (he was sixth in a line bearing the name Joseph Keaton)[1] and "Frank" for his maternal grandfather, who disapproved of his parents' union. Later, Keaton changed his middle name to "Francis".[1] His father was Joseph Hallie "Joe" Keaton, who owned a traveling show with Harry Houdinicalled the Mohawk Indian Medicine Company, which performed on stage and sold patent medicine on the side.

An American silent film actor, comedian, director, and screenwriter. Starting at the Selig Polyscope Company he eventually moved to Keystone Studios, where he worked with Mabel Normand and Harold Lloyd. He mentored Charlie Chaplin and discovered Buster Keaton and Bob Hope. Arbuckle was one of the most popular silent stars of the 1910s, and soon became one of the highest paid actors in Hollywood, signing a contract in 1920 with Paramount Pictures for US$14,000.00 (equivalent to approximately one million in 2018 dollars).
Between November 1921 and April 1922, Arbuckle was the defendant in three widely publicized trials for the rape and manslaughterof actress Virginia Rappe. Rappe had fallen ill at a party hosted by Arbuckle at the St. Francis Hotel in San Francisco in September 1921; she died four days later. Arbuckle was accused by Rappe's acquaintance of raping and accidentally killing Rappe. After the first two trials, which resulted in hung juries, Arbuckle was acquitted in the third trial and received a formal written statement of apology from the jury.
Despite Arbuckle's acquittal, the scandal has mostly overshadowed his legacy as a pioneering comedian. Following the trials, his films were banned and he was publicly ostracized. Although the ban on his films was lifted within a year, Arbuckle only worked sparingly through the 1920s. He later worked as a film director under the alias William Goodrich. He was finally able to return to acting, making short two-reel comedies in 1932 for Warner Bros.

Fields later embellished stories of his childhood, depicting himself as a runaway who lived by his wits on the streets of Philadelphia from an early age, but his home life seems to have been reasonably happy. He had already discovered in himself a facility for juggling, and a performance he witnessed at a local theater inspired him to dedicate substantial time to perfecting his juggling. At age 17, he was living with his family and performing a juggling act at church and theater shows.

Many silent era film comedians got their start in Vaudeville, a period of theater which featured variety acts and ran from the early 1880s to the early 1930s.

And of course, there are many modern practitioners of physical comedy. Here are a brave few...

There are many, many more physical comedians,
including Steve Martin, Martin Short,
Robin Williams, Dane Cook, Conan O’Brien...
alas too many to mention all here.

Now to do physical comedy effectively,

without hurting oneself, one must

become a proud member of the CCCP

Whether it's slipping, tripping colliding, falling down, getting slapped, making funny faces, walking into doors, or a simple double-take; one ought to remember that practice makes perfect and can prevent any serious injuries. This also applies to stage combat for serious roles.

Here are some tips and tricks

from professionals on how to pratfall:

Now it's your turn class. With the cameras on your phones shoot a simple sight gag.

Here is a list of possible jokes involving physical comedy:

For Safety:
Run it by me first before practicing!