Charles Dickens thought Americans weren’t very funny. “They certainly are not a humorous people,” he wrote in 1868, “and their temperament always impressed me as being of a dull and gloomy character.”
That’s not to say there weren’t early-American humorists. Augustus Baldwin Longstreet, Artemus Ward, and Mark Twain helped craft an American strain of comedy. But their humor was marked by lengthy tales and frequent references to small-town life; this wasn’t the scathing satire of French caricaturist Honoré Daumier or the urban sophistication of England’s Punch magazine, which developed the modern concept of the cartoon. But everything changed in the late 19th and early 20th centuries. That’s when America gave birth to stand-up comedy, a new art form that would eventually change comedy worldwide. But how, exactly, did stand-up come to be?
It’s an odd sort of entertainment. There’s no narrative structure, no plot, backstory, sets, editors, or producers. It’s comedy boiled down to basics: a comedian and an audience, where you either score a laugh or you don’t. As British comedian Jimmy Carr and writer Lucy Greeves put it in their book, Only Joking: What’s So Funny About Making People Laugh?, “Stand-up comedy is a peculiar performance art form. In a room filled with people, the comedian is the only one facing the wrong way. He’s also the only one who isn’t laughing. For normal people that’s a nightmare, not a career aspiration.”
Historians trace the origins of stand-up comedy to a very specific time and place: the variety, or burlesque shows, that flourished in New York City’s turn-of-the-century vaudeville theaters. Although widely known for its racy stripteases and dancing-girl performances, burlesque also featured energetic, fast-paced comedy routines. The comedians designed their material to appease a new sort of audience: a ragtag crew of native-born Americans and immigrant workers. These audiences were intimately familiar with the physical and chaotic nature of modern city life, and they weren’t interested in the homey campfire tales of the past. “Burlesque provided both an escape from and confrontation with modern urban circumstances,” writes historian Joseph Boskin in his book The Humor Prism in 20th-Century America. “Is it any wonder that many of the routines in burlesque were physically explosive, shorn of time constraint, bordering on the vituperative and relying heavily on slapstick?”
According to Boskin, standard vaudeville gags included “the pie-in-the-face, the female chase, problems of money, gold-digging wives and harping mothers-in-law, the salacious, unobtainable woman, and the defiance of authority.” Then, as now, poking fun at the powers-that-be was especially popular. Boskin notes vaudeville shows often climaxed “in a courtroom, with prisoners and lawyers squirting water at each other from seltzer bottles, and the judge demanding order with a wooden potato masher.”
The urban setting didn’t just shape the subject matter; the structure of the jokes changed, too. “The tempo of the comedy, like the movement of city streets, was swift and jolting and possessed highly recognizable parameters,” writes Boskin. Up to that point, written and oral jokes were mostly witty rhymes or droll anecdotes. Here’s one of the shorter “jokes,” for example, from The Odd Fellow’s Jest Book, published in 1805:

A woman in France having gone to confession, the priest, by way of penance, was proceeding to give her a flagellation. As he was leading her behind the altar for this purpose, her husband, from a motive of jealousy, had followed her, and concealed himself in the church, made his appearance and saying that she was too delicate to bear the discipline, offered to receive it in her stead. The proposal the wife greatly applauded, and the man no sooner placed himself on his knees, than she exclaimed, “Now, father, do not spare him, but lay on lustily, for truly I am a great sinner.” 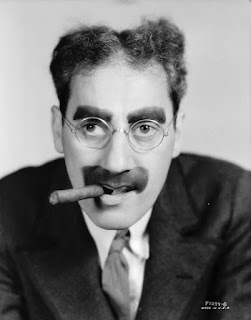 To keep their routines quick, lively, and appealing to a raucous audience, vaudeville performers refined their material using basic setups and punch lines. These were quick-hit laugh generators that could be linked together to keep the crowd cackling. Jokes, in other words, were becoming what we now know as jokes. Take a classic one-liner from Groucho Marx, who got his start in vaudeville: “Behind every successful man is a woman. Behind her is his wife.”
The developing cinema industry eventually overshadowed the vaudeville theaters, but the comedic style developed in these venues survived. In the following decades, the wild, rapid-fire shtick was embraced and refined by Sid Caesar, Henny Youngman, and other one-liner kings who worked the “Borscht Belt” of Jewish resorts in the Catskills. Then, in the 1950s and 1960s, it developed a more confrontational edge thanks to the routines of Lenny Bruce, Dick Gregory, and Mort Sahl at folk clubs like the “hungry i” in San Francisco and New York City’s Bitter End.
Some scholars believe that the United States was destined to reinvent global comedy, in one form or another. To these thinkers, the idea of America is inherently funny: There’s such a laughable disparity between the lofty ideals of American democracy and the harsh realities of self-governance that it was bound to generate a lot of jokes. As literary scholar Louis D. Rubin put it in his essay, “The Great American Joke”:

Out of the incongruity between mundane circumstance and heroic ideal, material fact and spiritual hunger, democratic, middle-class society and desire for cultural definition, theory of equality and fact of social and economic inequality, the Declaration of Independence and the Prohibition Act, the Gettysburg Address and the Gross National Product, the Battle Hymn of the Republic and Dollar Diplomacy, the Horatio Alger ideal and the New York Social Register—between what men would be and must be, as acted out in American experience, have come a great deal of pathos, no small bit of tragedy, and also a great deal of humor.

There’s a lingering question about stand-up’s development, however: Who was the first person to actually do it? Some scholars point to Charley Case, an African-American vaudeville performer. According to Eddie Tafoya in his book The Legacy of the Wisecrack, in the 1880s or 1890s Case got on stage in New York’s vaudeville theaters and did something no one had ever done: He performed comic monologues without props or costuming.
Little is known about Case today. He’s most widely known for the absurd ballads he penned, including “There Was Once a Poor Young Man Who Left His Country Home,” which was later performed by W.C. Fields in The Fatal Glass of Beer, a 1933 film based on the song. Various articles list a few of his jokes, like one in which Case and his brother Hank are sleeping in a bedroom with their father and they hear a noise downstairs. “I think there’s a burglar loose in the house,” the father tells Hank. “You should go down and find him.” “I haven’t lost any burglars,” replied Hank. “Make Charley go down.”
The little we know about Case’s personal life tends to resemble the stereotype of a modern, neurotic comedian. A 1906 newspaper article noted, “He is of a quiet and retiring disposition when off the stage,” and other observers noted he would only perform if he had a handkerchief or bit of string to twiddle in his fingers.
Then there are the circumstances of his untimely end. In 1916, he died at the Palace Hotel on 45th Street in New York “while cleaning his revolver,” as reports later put it.
Charley Case, in other words, might not have just given birth to stand-up. He also gave birth to the idea of the depressed, tortured comedian.
😂 😲 🙈🙉🙊 😲 😂
COMEDY WRITING SECRETS
List of Open Mic Comedy in Chicago
😂 😲 🙈🙉🙊 😲 😂
Notable Comics:
Lenny Bruce
His 8 greatest routines

Secrets to writing STAND UP COMEDY by Judd Apatow