For Just A Few Magic Beans...

One more sacred cow and I would swear I was back in India. When it comes to City Council meetings, there are certain items not open for public discussion. Delicate issues are often shelved indefinitely or merely whispered about behind locked doors in closed session. I guess the people at City Hall wouldn't want us to have a cow.

The following are some of the unmentionable issues:

Tideland funds, monies that are meant to stay in the waterfront area, are being misdirected into the general fund. I guess the cash is always greener on the other side. Furthermore, The Harbor Patrol fits under column of Fire Department in the budget; which is why Fire Department consolidation between the Beach Cities is off the table for discussion . Merging services among the Cities, as was done with SWAT teams, would mean a reduction of middle and upper level management. But, I reckon, why buy the cow when you can get the milk for free?

Condo developers have way too much weight when it comes to matters of zoning. Mixed-use zoning is a sham, and the commercial properties, below the residential complexes, usually lie vacant or change hands quickly. It's a backdoor condo zoning dodge. And more to the point, why aren't developers being made to build with sound sturdy sensible materials; condos that are built to last longer than 40 years.

Why is the Chamber of Commerce even considered a legitimate organization? They are such a blatant tool of AES that they have actually been sending out mailers against candidates who let slip an unnecessary power plant in our backyard may not be the best thing for commerce in the City of Redondo Beach. The Chamber is so out of sync with real businesses in the City, they might as well be a cow on roller skates.

Okay, a few more. Why only now are we coming to conclusive results about what killed a million fish March 8th 2011, and where is the harbor oxygenation to prevent it from happening again? Are bans and restrictions domesticating us like so much cattle? Why are we allowing predator drones to fly over our cities and isn't anyone in government paying attention to the Constitution?! 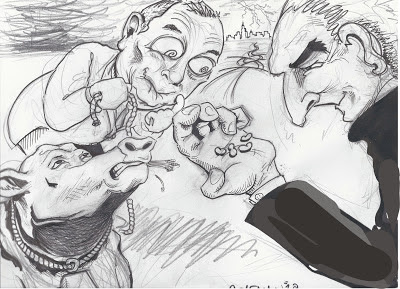