No, I regret nothing

French singer Édith Piaf, also known as “The Little Sparrow,”
was one of the most iconic performers of her native country. 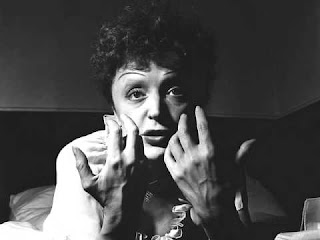 Édith Piaf was born in Belleville, on the outskirts of Paris, on December 19, 1915, and rose to international stardom in the late 1930s as a symbol of French passion and tenacity. Of Piaf’s many ballads, “La Vie en Rose,” which she wrote, is remembered as her signature song. Other favorites among the singer's repertoire include "Milord," "Padam Padam," "Mon Dieu," the charming "Mon Manège à Moi" and the anthemic "Non, Je Ne Regrette Rien." Having a life beset by addictions and related health issues, Piaf died in France in 1963 at the age of 47. She continues to be revered as a national treasure. 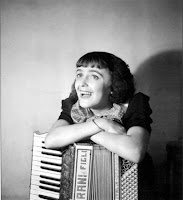 Édith Piaf was born Édith Giovanna Gassion in Belleville, Paris on December 19, 1915. Much of her past is shrouded in mystery and may have been embellished during her time as a celebrity. It is believed she was named after the World War I British nurse Edith Cavell, executed for helping Belgian soldiers escape from German captivity. Her mother, Annetta Giovanna Maillard, was a cafe singer of Moroccan Berber descent who performed under the name “Line Marsa.” Piaf’s father, Louis-Alphonse Gassion, was a highly skilled street acrobat.
Annetta had abandoned Piaf to live with her maternal grandmother, where she grew malnourished. Being taken from that household by her father or another relative, Piaf then lived with her paternal grandmother, who ran a brothel. Piaf suffered greatly from impaired vision for a time yet also became renowned for her voice at a young age. At the age of 7, she joined her father and a circus caravan to travel to Belgium, eventually participating in street performances all over France.
Piaf later separated from her father, who was often a temperamental, abusive taskmaster, and set out on her own as a street singer in and around Paris. At 17, she and a youngster named Louis Dupont had a daughter, Marcelle, who died of meningitis at 2 years old. 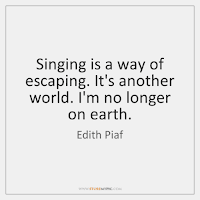 In 1935, Piaf was discovered by Louis Leplée, who owned the successful club Le Gerny off the Champs-Élysées. Her nervous energy and small stature inspired the nickname that would stay with her for the rest of her life: La Môme Piaf ("The Little Sparrow"). Piaf received guidance in the literary arts from French poet/historian Jacques Bourgeat, while Leplée ran a major publicity campaign promoting Piaf’s opening night, which was attended by the likes of Maurice Chevalier. She was popular enough to record two albums that same year.
Leplée was murdered the following spring. After authorities investigated her as a potential accomplice to the crime, Piaf and a new team took charge of her career. She began to work with Raymond Asso, who also became her lover, and adopted her stage name Édith Piaf permanently. Continuing the tradition of performing chansons réalistes, she commissioned songs that romanticized her life on the streets, passionately emphasizing her inner strength. The singer worked closely with composer Marguerite Monnot during this time.

Revered by luminaries like Jean Cocteau, Piaf was one of the most popular performers in France during World War II. Her concerts for German servicemen were controversial, although it was later believed that she had been working for the French Resistance and helped Jewish comrades escape Nazi persecution.
After the war, her fame spread quickly. She toured Europe, South America and the United States. Although American audiences were initially put off by her dour demeanor and dark clothes, Piaf garnered glowing reviews and ultimately achieved enough of an audience to warrant several televised performances on The Ed Sullivan Show throughout the 1950s.

The personal life of Édith Piaf was characteristically dramatic. She was involved in three serious car crashes after 1951, leading to morphine and alcohol addictions. 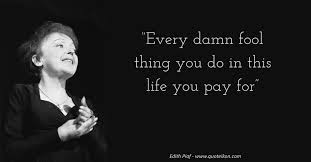 Piaf, living through the hurts and abandonments of her early life, had high-profile romances with many of her male associates and some of the biggest celebrities in France. Known for intense dalliances that fizzled out, she married twice. Her first marriage to singer Jacques Pills in 1952 lasted until 1957. Her 1962 marriage to Théo Sarapo, a Greek hairdresser and performer 20 years her junior who was gay, lasted until her death the following year.
It was revealed posthumously via letters that Piaf had great affection for Greek actor Dimitris Horn during the mid-1940s, but married boxer Marcel Cerdan, whom she met in 1947, was considered to be her deepest love. Their time together was cut short when he perished in a 1949 plane crash, with the singer recording "L'Hymne à L'Amour" the following year in his honor.

Piaf remained professionally active until the final years of her life, performing frequently in Paris between 1955 and 1962. In 1960, though aiming to retire, she had a resurgence of sorts with the recording of the Charles Dumont and Michel Vaucaire tune "Non, Je Ne Regrette Rien," which would become her latter day anthem.

April 1963, Piaf recorded her last song. With an array of health hardships over the years, Édith Piaf died from liver failure at her French Riviera villa on October 10, 1963. (Other potential causes of death have been suggested as well.) She was 47. The archbishop of Paris denied requests for a Mass, citing Piaf’s irreligious lifestyle, but her funeral procession was nonetheless a massive undertaking attended by thousands of devotees. She is buried in Père Lachaise Cemetery in Paris next to her daughter Marcelle.


A lauded biopic on Piaf was released in 2007—La Vie en Rose, with French actress Marion Cotillard ardently embodying the singer and earning an Academy Award. The Knopf book No Regrets: The Life of Edith Piaf, by Carolyn Burke, was published in 2011.
Plans to mark the centennial of Piaf's birth in 2015 include a 350-track box set to be released by Parlophone and a major exhibition to be held at the Bibliothèque Nationale de France. "The magic of Piaf is her repertoire that touches everyone,” said Joël Huthwohl, the head curator of the exhibit, in an interview with The Guardian. “She sang simple songs with lovely melodies that spoke to everyone at those important moments in their lives."