And the Universe is a very strange place...

The Double Slit Experiment blew my mind when I first learned of it...

ARE YOU LIVING IN A COMPUTER SIMULATION?

This paper argues that at least one of the following propositions is true: (1) the human species is very likely to go extinct before reaching a “posthuman” stage; (2) any posthuman civilization is extremely unlikely to run a significant number of simulations of their evolutionary history (or variations thereof); (3) we are almost certainly living in a computer simulation. It follows that the belief that there is a significant chance that we will one day become posthumans who run ancestor-simulations is false, unless we are currently living in a simulation. 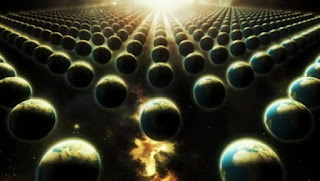 Many religions believe in multiverses and it is mentioned in many religious book like :
In Apannaka Jataka : Disciples," the Buddha said "nowhere between the lowest of hells below and the highest heaven above, nowhere in all the infinite worlds that stretch right and left, is there the equal, much less the superior, of a Buddha. Incalculable is the excellence which springs from obeying the Precepts and from other virtuous conduct." which talk about the infinite world.
Secondly,
In Bhagavata Purana : Every universe is covered by seven layers — earth, water, fire, air, sky, the total energy and false ego — each ten times greater than the previous one. There are innumerable universes besides this one, and although they are unlimitedly large, they move about like atoms in You. Therefore You are called unlimited (Bhagavata Purana 6.16.37)
In Kaballah (Judaism) : "There are five worlds between the Creator and our world. Each of them consists of five Partzufim and each Partzuf of five Sefirot. In total there are 125 levels between us and the Creator. Malchut, moving through all these levels, reaches the last one, and in this way, Behina Dalet, the only creation, merges with the four previous phases."
In Quran,Matlaib Al Razi states : "All praise belongs to God, Lord of the Worlds." He raises the question of whether the term "worlds" in this verse refers to "multiple worlds within this single universe or to many other universes or a multiverse beyond this known universe."

Okay, back to Philip K. Dick. He had several visions throughout his life, and believed that worlds branch off from this reality. One of his books, Man in the High Castle, was made into a Amazon Prime series. It is about an alternate reality where the Axis Powers won WWII.

Other Alternate History books worth reading:

ASSIGNMENT: Write a conversation where you meet yourself in a parallel world
or
Think of an event in history. Now think that the opposite thing occurred or something different happened. What would the effects be?