Old school hip-hop describes the earliest commercially recorded hip-hop music (approximately from 1979-1984) and the music in the period preceding it from which it was directly descended. Old school hip-hop is said to have ended around 1984 due to changes in both rapping technique and the accompanying music and rhythms.
Some people say that Bob Dylan's Subterranean Homesick Blues, with it's unleashed stream of consciousness, was the first rap song...

The image, styles, and sounds of the old school were exemplified by figures like
Afrika Bambaataa


Grandmaster Flash and the Furious Five

Funky Four Plus One

And Kurtis Blow, Busy Bee Starski, Lovebug Starksi, The Cold Crush Brothers, and Fab Five Freddy. It is characterized by the simpler rapping techniques of the time and the general focus on party related subject matter. 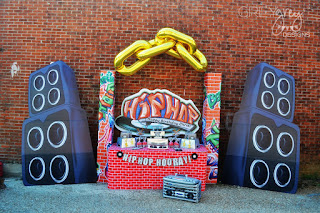 Much of the subject matter of old school hip-hop centers around partying and having a good time. Immortal Technique explains how party content played a big part in old school hip-hop, in the book How to Rap: “hip-hop was born in an era of social turmoil…in the same way that slaves used to sing songs on a plantation…that’s the party songs that we used to have.”

Battle rap was also a part of old school hip-hop. A famous old school hip-hop battle occurred in December 1981 when Kool Moe Dee challenged Busy Bee Starski.
Busy Bee Starski’s defeat by the more complex raps of Kool Moe Dee meant that “no longer was an MC just a crowd-pleasing comedian with a slick tongue; he was a commentator and a storyteller,” which KRS-One also credits as creating a shift in rapping in the documentary Beef.
https://www.youtube.com/watch?v=lHXwpky1fVw

Freestyle rap during hip-hop’s old school had a different from the definition it has today – Kool Moe Dee refers to this earlier definition in his book, There’s a God on the Mic: “There are two types of freestyle. There’s an old school freestyle that’s basically rhymes that you’ve written that may not have anything to do with any subject or that goes all over the place. Then there’s freestyle where you come off the top of the head.” In old school hip-hop, Kool Moe Dee says that improvisational rapping was instead called “coming off the top of the head,” and he refers to this as “the real old school freestyle.” This is in contrast to the more recent definition defining freestyle rap as “improvisational rap like a jazz solo.”
Old school hip-hop would often sample disco and funk tracks. However the use of funk samples went into a decline from 1983 onwards. A live band was often used, as in the case of The Sugarhill Gang. The use of extended percussion breaks led to the development of mixing and scratching techniques.

This led the way to the next generation of Hip Hop...

And of course, Gangster RAP...

Assignment: generate a rap song
https://www.song-lyrics-generator.org.uk/rap/
Posted by Eric J. Coleman at 12:16 AM