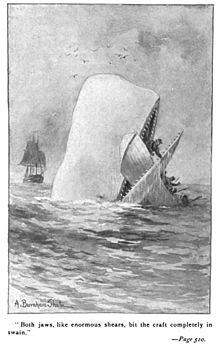 As Terrence McKenna puts it, "Moby Dick is one of the greatest works of prose ever written. In tbe end America will be remembered for 2 things, we went to the moon and we are the people that produced Moby Dick."

"I am game for his crooked jaw, and for the jaws of Death too, Captain Ahab, if it fairly comes in the way of the business we follow; but I came here to hunt whales, not my commander's vengeance. How many barrels will thy vengeance yield thee even if thou gettest it, Captain Ahab? it will not fetch thee much in our Nantucket market."
"Nantucket market! Hoot! But come closer, Starbuck; thou requirest a little lower layer. If money's to be the measurer, man, and the accountants have computed their great counting-house the globe, by girdling it with guineas, one to every three parts of an inch; then, let me tell thee, that my vengeance will fetch a great premium HERE!"
"He smites his chest," whispered Stubb, "what's that for? methinks it rings most vast, but hollow."
"Vengeance on a dumb brute!" cried Starbuck, "that simply smote thee from blindest instinct! Madness! To be enraged with a dumb thing, Captain Ahab, seems blasphemous."
"Hark ye yet again--the little lower layer. All visible objects, man, are but as pasteboard masks. But in each event--in the living act, the undoubted deed--there, some unknown but still reasoning thing puts forth the mouldings of its features from behind the unreasoning mask. If man will strike, strike through the mask! How can the prisoner reach outside except by thrusting through the wall? To me, the white whale is that wall, shoved near to me. Sometimes I think there's naught beyond. But 'tis enough. He tasks me; he heaps me; I see in him outrageous strength, with an inscrutable malice sinewing it. That inscrutable thing is chiefly what I hate; and be the white whale agent, or be the white whale principal, I will wreak that hate upon him. Talk not to me of blasphemy, man; I'd strike the sun if it insulted me. For could the sun do that, then could I do the other; since there is ever a sort of fair play herein, jealousy presiding over all creations. But not my master, man, is even that fair play. Who's over me? Truth hath no confines. Take off thine eye! more intolerable than fiends' glarings is a doltish stare! So, so; thou reddenest and palest; my heat has melted thee to anger-glow. But look ye, Starbuck, what is said in heat, that thing unsays itself. There are men from whom warm words are small indignity. I meant not to incense thee. Let it go. Look! see yonder Turkish cheeks of spotted tawn--living, breathing pictures painted by the sun. The Pagan leopards--the unrecking and unworshipping things, that live; and seek, and give no reasons for the torrid life they feel! The crew, man, the crew! Are they not one and all with Ahab, in this matter of the whale? See Stubb! he laughs! See yonder Chilian! he snorts to think of it. Stand up amid the general hurricane, thy one tost sapling cannot, Starbuck! And what is it? Reckon it. 'Tis but to help strike a fin; no wondrous feat for Starbuck. What is it more? From this one poor hunt, then, the best lance out of all Nantucket, surely he will not hang back, when every foremast-hand has clutched a whetstone? Ah! constrainings seize thee; I see! the billow lifts thee! Speak, but speak!--Aye, aye! thy silence, then, THAT voices thee. (ASIDE) Something shot from my dilated nostrils, he has inhaled it in his lungs. Starbuck now is mine; cannot oppose me now, without rebellion."

More about the author:

Herman Melville spent many years as a sailor traveling the high seas and new the material first hand. When Robert Eggers set out to create a movie about two Lighthouse Keepers in 1890's New England he had to do a ton of research. He read Melville, Coleridge, nautical myths, and even sailor's journals from that era.

Like many holy texts, Moby Dick is both mysteriously indecipherable and oddly compelling. There is some truth in this book, but first you have to do some digging.

ASSIGNMENT: look at the opening paragraph of the quote above. Trying putting it in your own words. 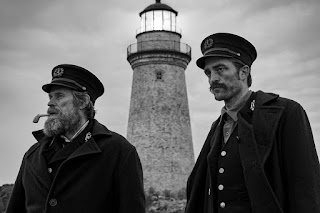